Skip to content
November 24, 2018 Author by Tom ChildsPosted in Articles

The Chiefs picked up their 2nd loss of the season on Monday Night Football against the Los Angeles Rams, an absolute powerhouse in the NFC. Now at 9-2, should Kansas City fans now be worried about the postseason?

The AFC is very much a 4 horse race as we approach the home stretch of the season. Aside from the Chiefs, Chargers, Steelers and Patriots, I don’t see any other team being able to reach the Super Bowl come February.

However, this wasn’t the case earlier in the season. With the Chargers, once again, not living up to the hype, and the Patriots and Steelers both underperforming, the Chiefs looked like an unstoppable force in the conference.

So just how big of a threat are the other 3 to the Chiefs’ playoff run? Can the Chiefs still make it all the way? Let’s find out. 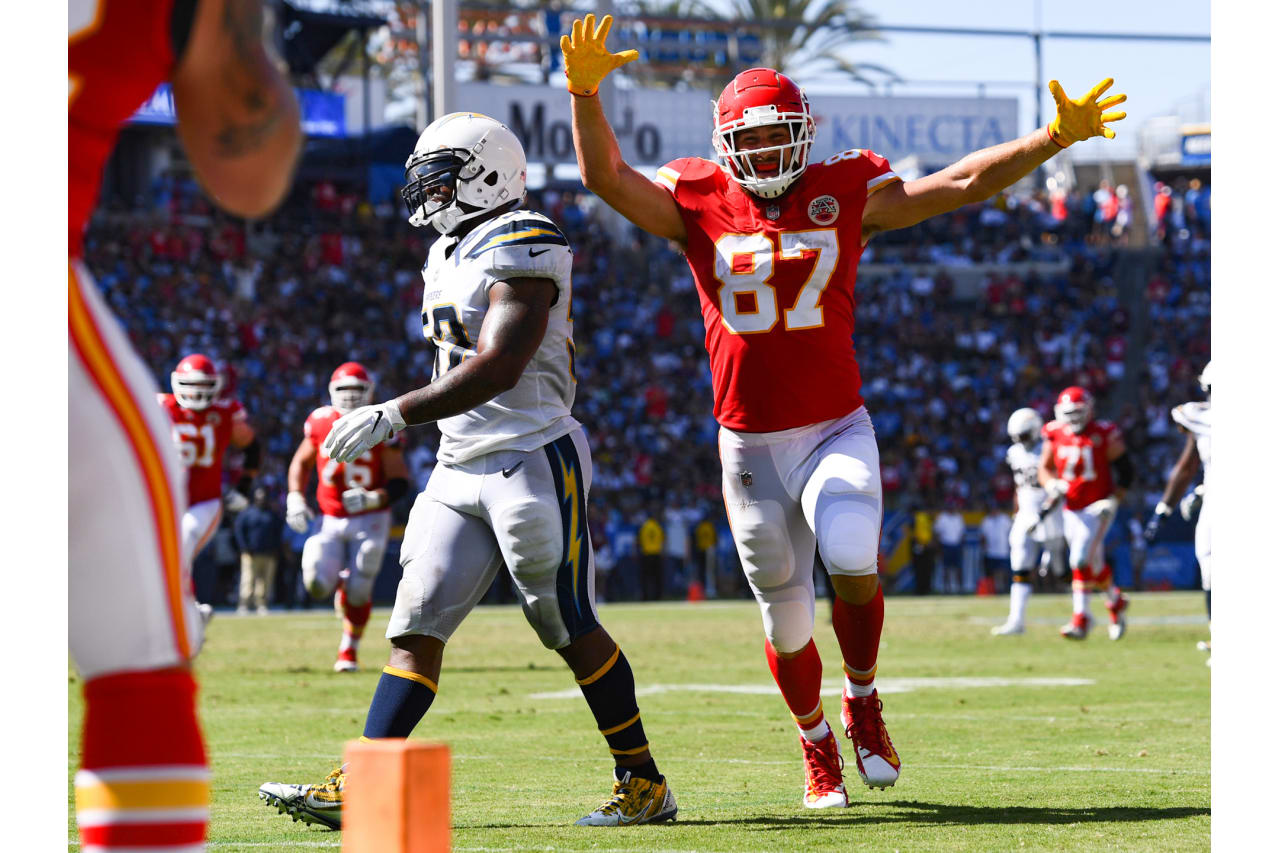 Currently sitting at 7-3 and coming off a tough loss to the Denver Broncos is a good, not great, position to be in if your a Bolts fan. Losing such a nailbiter against a non-playoff contending team, especially a divisional rival, doesn’t set up a great argument going forward. Their other 2 losses came from the 10-1 Rams and, of course, the 9-2 Chiefs; which is more understandable considering both of their current positions in the league.

However, they’re still a very formidable team. Rivers currently has the 3rd most passing yards in the AFC this season, behind Mahomes and Rothlisberger. As well as this, Melvin Gordon also has the 3rd most rushing yards in AFC too. This is bad news for Chiefs fan because our defence is currently ranked last in passing yards allowed per game as well as 21st for rushing yards allowed per game. So, if the potent combination of Rivers and Gordon continues, it could mean trouble for the Chiefs defence in our second matchup of the year in week 15; let alone the playoffs!

It’s also hard turning the ball over against this Chargers’ offence as they’re currently ranked 4th in giveaways (with 0.9/game). Therefore the Chiefs are going to have to find a different way to stop them defensively.

Their weakness at the moment is currently keeping drives alive (they’re ranked 29th in 3rd down conversions per game). This will be even more crucial in the playoffs where the Chiefs will need to rely on their defence to give Mahomes as many opportunities to put points on the board as he can.

Another factor to stopping the Chargers is by making sure they don’t get off to a hot start offensively. They’re currently ranked 4th in 1st half points per game but 26th in 2nd half points per game. Therefore, slowing down Rivers in the beginning of the game will heavily limit their confidence and ability to score points going forward. On the other hand, the Chiefs are currently ranked 1st in 1st half points and 2nd in 2nd half points; meaning we can run the score up effectively no matter what part of the game we’re in.

However, we haven’t considered the Chargers’ defence yet. They’ve only allow 2.4 touchdowns per game on the season so far (8th in the NFL). Although, having said that, I still feel like the Chiefs’ monster offence can get the better of this Chargers defence, like they did in their week 1 matchup. They’ve allowed 353.4 yards/game despite the lack of touchdowns they’ve conceded.

The Chiefs can certainly take advantage of their ‘bend don’t break’ defensive system because of our ability to strike from anywhere on the field. Tyreek Hill alone has had 6 touchdown receptions of 20+ yards (3 of which were 50+). This shows how we don’t have to string together a lot of consecutive plays in order to score; we’re a threat for the entire length of the field and can take the defence by surprise, with a big play, at any moment.

The Chargers are the lesser of the three threats because, i believe, our offence will be able to shock the Chargers defence, pun not intended, and overcome their ‘bend don’t break’ defensive strategy. On the other side of the ball, despite the two-headed snake of Rivers and Gordon, as well as pro-bowl calibre receiver Keenan Allen, the Chiefs’ can still expose their weaknesses. By putting LA into 3rd and long situations, which will help keep Rivers off the field for as long as possible, we should be able to take care of business against them in the postseason. 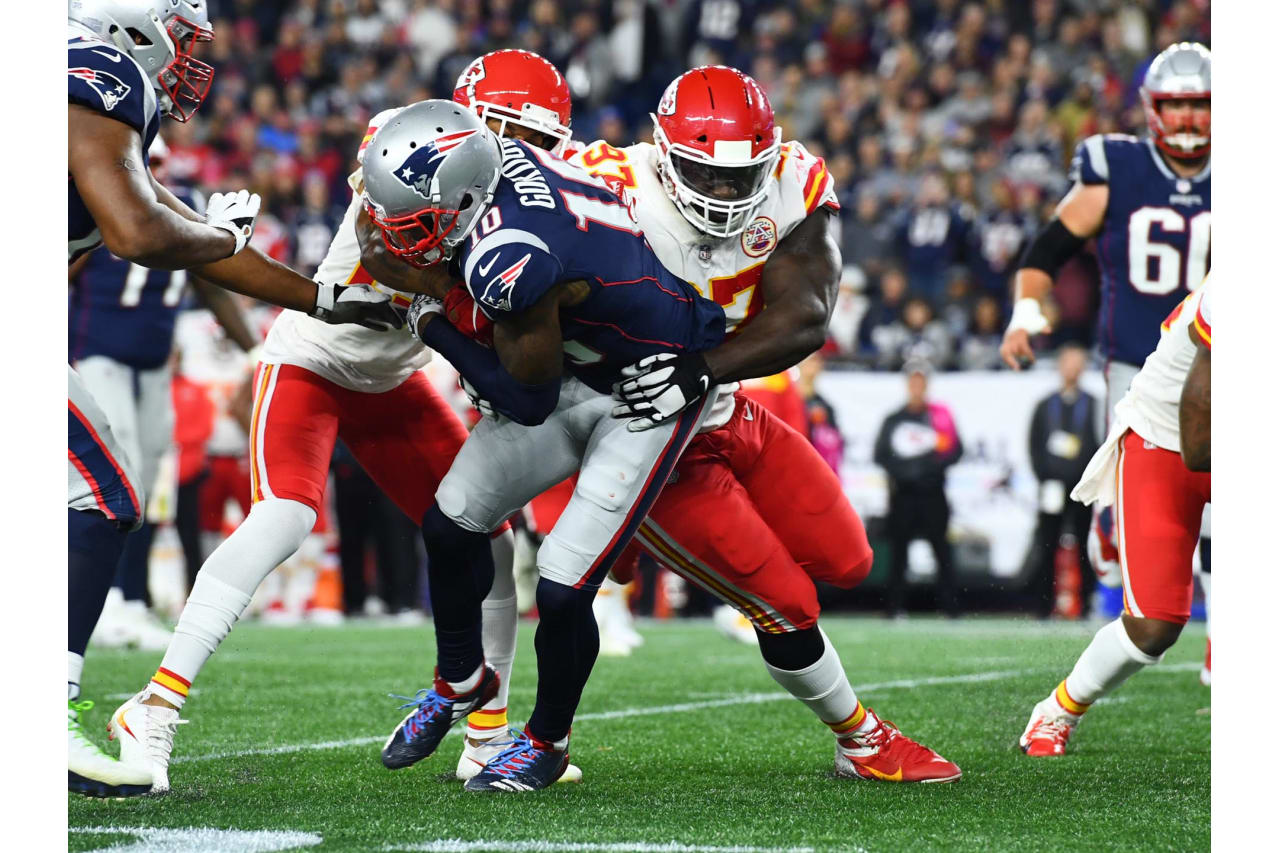 Belichick’s Patriots are 2nd on my list. You can’t go a season without considering Tom Brady and Bill Belichick as serious contenders for the title. Admittedly they did start off slow, with a 1-2 record after the first 3 weeks of the season; picking up losses against the Jaguars and Lions. On top of this,  their other loss, in their 7-3 season so far, came in week 10 against the Titans (a blow out win for Tennessee 34-10).

However, aside from the three low points in the season, the Pats have still looked good. They went on a 6 game win streak between weeks 4 and 9 including a huge win against the Chiefs in Foxborough and 2 dominating performances against, two of their divisional rivals, the Dolphins, in week 4, and the Bills, in week 8.

Tom Brady is currently 5th in the AFC for passing yards, which is still impressive despite being a step back from his usual form. As a whole offence they’re currently 19th in the league for rushing yards per game; again good, but not great.

However one area that New England is doing well right now is keeping Tom Brady on his feet. They’re currently 4th in the league for sacks allowed per game (1.6) which means that Brady has all day to get the job done. This is proven as he’s also throwing less than one interception per game (0.7) which is 11th in the league.

Therefore, how do you stop the Patriots? We need to get pressure on Tom Brady. If you give him time in the pocket he will eat our secondary alive. However, as we are 4th in sacks per game this season (3.3), we should prove to be a tough matchup for that productive New England offensive line. Last time they faced off in week 6 we had 2 sacks, 3 QB hits and 3 tackles for a loss; which are all decent stats. But we need them to be higher if we do end up facing them in the playoffs.

Our run defence has been very hit and miss this season; allowing 117.5 rushing yards/game. However the Patriots have never been very run focused as an offensive system. Therefore our focus needs to be on the passing attack. If we can limit Tom Brady’s time to release the ball, as well as play tight coverage on their receivers, we should be able to force them to rely on their weaker run game. This is where we’ll be able to force stops and get them off of the field.

We also need to come scoring out the gate. If we put points on the board early we should be able to shock the Patriots and maintain our momentum on offence. New England’s defence has only allowed an average of 10.6 points in the first half of their games this year. The Chiefs’ offence needs to be an anomaly in this stat if we come up against them in the postseason. This is something we failed to do in our week 6 matchup versus New England, as we only scored 9 points in the first 2 quarters of the game, whilst they scored 24 on us.

Mahomes should have little problem getting the ball moving through the air as the Pats are currently 25th in the league for passing yards allowed per game (270.3). Therefore Patrick Mahomes can help to open up the running lanes for Kareem Hunt to get the job done on the ground too. The Chiefs’ RB is currently 3rd in the league, and first in the AFC, for rushing yards and is set to have a great sophomore season. Therefore, if he can successfully get the ball moving on his feet we should have a deadly two-headed attack and overwhelm the Patriots defence.

The reason why I put them ahead of the Chargers is simply due to experience. This isn’t Belichick and Brady’s first rodeo. They’ve visited the playoffs for the past 9 years straight and both have 5 super bowl rings. This isn’t new to them and therefore they’ll prove to be a challenge if we face them in the postseason. 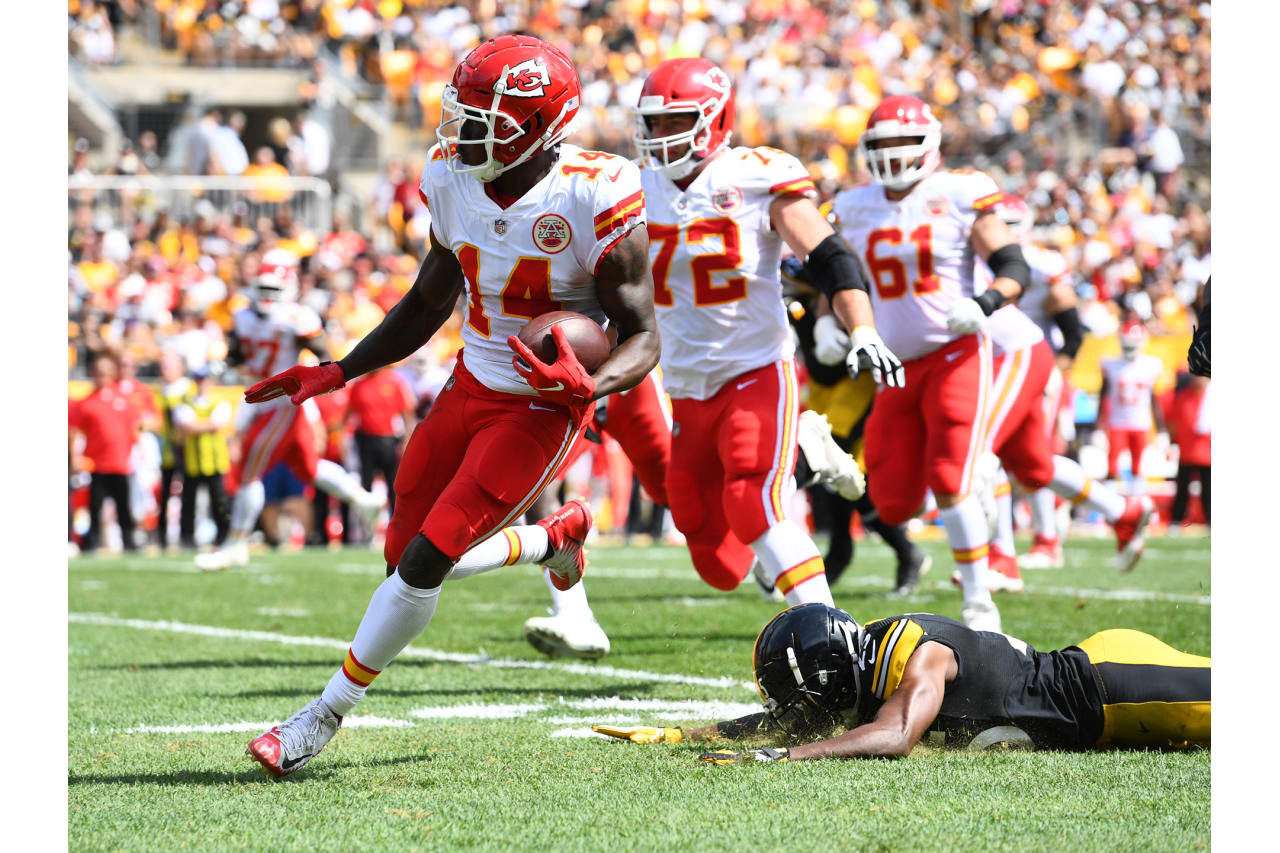 The Steelers, with a slightly better record than the Chargers and Patriots (7-2-1), are who I beleive are the biggest threat to the Chiefs making a deep playoff run this year. Despite the absence of Le’veon Bell for the remainder of the season, this team is still the scariest in the AFC; aside from Kansas City.

Big Ben Roethlisberger and James Conner have more passing and rushing yards than Philip Rivers and Melvin Gordon – making them the more threatening duo. Their offence is also 5 places ahead of the Chargers, and 3 places ahead of the Patriots, when it comes to points/game (Pittsburgh is 4th). But it’s their red zone offence, in particular, which is the most lethal; with a 77% touchdown percentage whilst inside their opponents 20.

Therefore, keeping Pittsburgh outside of the red zone will be crucial in slowing down their offence and forcing them to kick field goals from distance. Once Big Ben starts knocking on his opponent’s door, more often than not, he’s going to get in.

However, Pittsburgh does happen to be one of the worst teams in the league for keeping the ball in their possession. They’re 31st in fumbles lost per game (0.9) and 23rd in interceptions thrown (1.0) so the Chiefs need to make the Steelers pay for their mistakes by turning these potential turnovers into points. The secondary can’t be dropping interceptions (I’m looking at your Scandrick) and they need to get the Steelers off the field as quick and as often as they can.

However they are 24th in interceptions per game (0.6). With less than one interception per game, on average, the Chiefs need to make sure they’re progressing the ball down field in small chunks. If Mahomes doesn’t release the ball quick then that’ll result in sacks. He needs to use what he learnt from sitting behind Alex Smith last season and get rid of the ball nice and quickly to ensure that he stays unhit and the defenders don’t have time to make a play.

We saw this in action against the Rams where Mahomes had 2 fumbles because he held the ball for too long in the pocket. The Steelers also average more fumbles per game than the Rams so they’ll, statistically, be even better at knocking that ball loose.

Despite this, I still feel as though the Chiefs are in a firm position to take down any of these teams in the AFC championship game; or earlier if needs be. If the season carries on like this, it seems like Kansas City will claim the number 1 seed in the AFC. If that turns out to be the case, everyone who faces the Chiefs in the playoffs will have to go through Arrowhead Stadium. That raises the question: Can any of these teams beat the Chiefs at Arrowhead? I’m not so sure.

Our only 2 losses, so far, this season have been close ones (both decided by 3 points). We’ve also been on the road for both of them. On top of this, Eric Berry is coming back to training this week and 2 of our starting lineman are still yet to come back. The sky’s the limit for this 2018 Chiefs team, and I’m all strapped in and ready for the ride.

One thought on “Road to the Super Bowl – What are the Chiefs’ chances?”