After a week off I’m back with the second half of my ‘season in review’ series; the defence. I’m going to breaking down this side of the ball into subsections, just like I did with the offence. So, to start things off on a high note, today we’re going to be reviewing the defensive line.
To consider the Chiefs defence as underwhelming this year is an understatement. However, the defensive line was definitely a thorn in many of the opponents’ sides this year simply due to the large amount of production we had. We led the league in sacks with 52 (tied with Pittsburgh) and were 4th in sacks per game with 3.1. So getting to the quarterback was definitely a highlight for the defence. If there was pressure from the moment the ball was snapped the defence tended to be successful in limiting our opponent’s offensive production.

However if their o-line maintained their structure from the initial rush, the cracks started to show. Despite the high sack count we still managed to end up 2nd last in opponent passing yards per game (with 272.3 yards) and were 20th in passing touchdowns allowed per game (with 1.8). Seems like that high note didn’t really last long, but unfortunately that was the grim reality of being a Chiefs fan last season.
As much fun as it was to watch Mahomes, Hill and Kelce light up the skies week in week out last season, you’d be lying if you said that the Chiefs defence was anything other than a disappointment. Aside from that incredible performance in the Divisional Round against Indy of course, but we’ll get onto that later.
With the defensive line in particular though, who stood out the most? Well the obvious name is Chris Jones. He led the team in sacks with 15.5 on the year (over double what he had in 2017). As well as sacks, the 3rd year defensive end also had a total of 29 quarterback hits and 19 tackles for a loss; a true menace in the backfield. But Jones wasn’t only making plays behind the offensive line, he also caught an interception which he took back for a 20 yard touchdown and forced 2 fumbles.
And if that wasn’t enough, Jones also went on to receive a second team all-pro selection as well! What more could you ask for a defensive lineman?

However Jones couldn’t have done it all by himself. Alongside him for the majority of snaps was 8 year NFL veteran Allen Bailey, who had his best season so far for the Chiefs. Picking up 6 sacks (a career high), 2 forced fumbles and 4 fumble recoveries (one of which was returned for a TD). He was arguably the 2nd best player along the defensive line in 2018 and seems to have aged like a fine wine. I’m not saying he’s a machine like Jones, but he did perform well enough last season to make an impact.
So that’s the veterans, what about the rookie talent on the defensive line? Well there were two fresh faces on the line this year and they were 2nd round pick Breeland Speaks from the University of Mississippi and 3rd round pick Derrick Nnadi out of Florida State. Speaks had a decent season in KC playing in all 16 games (starting just 4 of them). He had 1 forced fumble, 2 fumble recoveries and 1.5 sacks on the year. Nnadi, on the other hand, played in all 16 games of the regular season and started in 11 of them. It was a relatively quiet year stats wise as he didn’t pick up a single sack and or QB hit in the entire regular season. In the postseason he had a tackle for a loss against the Colts and a QB hit against the Patriots; again not the boldest of stat lines.

However Nnadi wasn’t drafted to help with pass rushing (it’s actually considered a weakness of his). Instead, the rookie was brought in to fix the run defence of the team. Although his impact may not show up on a stat sheet it certainly is shown on tape. His natural ability to shed blocks and fill potential running lanes showed a lot of promise from the 1st year lineman.
As well as these guys, the Chiefs also brought in Xavier Williams from the Cardinals during the 2018 off season. The 4 year veteran played in all 16 games (only starting in 4 of them) and had an average season. Sacking the QB 2.5 times with 4 QB hits, 1 forced fumble and 47 combined tackles is decent for a second string nose tackle. His job wasn’t to start and be a superstar. Instead, I think it was to provide Nnadi with someone to prove himself against. Our DT depth wasn’t particular strong and therefore signing Williams allowed us to be more fluid with who was on the field and use players to their strengths.

So, taking a look at the strongest part of our defence was a bit of a rollercoaster. On the one side having an extremely talented player like Chris Jones on the team is great but it seems like teams were still able to run our defence up and down the field week in week out.
However there may be a light at the end of the tunnel, as it seems like the Chiefs front office have decided to completely restructure the defence in this year’s off season; which I’m not opposed to at all. Cutting Justin Houston and Eric berry sent a clear message that it was the end of an era for the Chiefs’. However, as the famous saying goes: when one door closes, another one opens and, when it opens, it’s going to have Chris Jones waiting on the other side of it, ready to go. I get the impression that he’s going to be the new face of our defence going forward, that’s especially clear with the trading of Dee Ford to the 49ers and the introduction of new defensive coordinator Steve Spagnuolo. 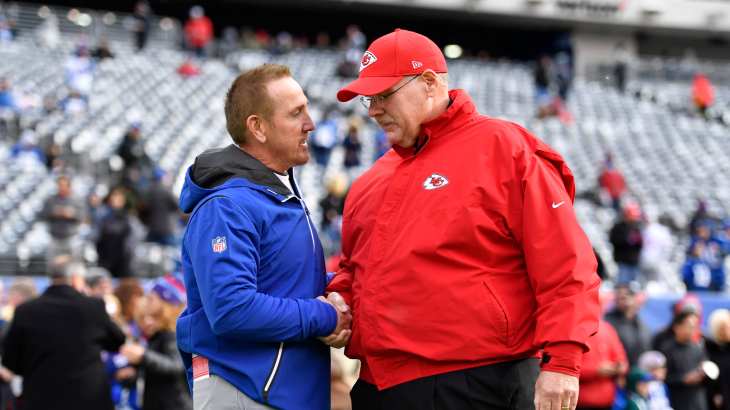 There’s going to be a huge shift in how the defence plays next season, going from Sutton’s 3-4 system to Spagnuolo’s Under 4-3. I’ll explain what the future may have in store for the Chiefs’ defensive line right after the ‘performance of the season’.

Performance of the Season:
My options for the defensive lines best performance this season were either the week 17 matchup against the Raiders or the Divisional Round game against the Colts. I decided to go for the week 17 game for a couple of reasons.
First of all the defence as a whole managed to keep the Raiders to only 3 points. This was largely helped by the front line who sacked Derek Carr 3 times on the day. The constant pressure on Carr meant that his throws weren’t landing which meant that the team just couldn’t string together enough plays to form a decent drive.
There were a total of 4 turnovers by the Raider’s offence that day, 2 interceptions and 2 fumbles that were recovered by the Chiefs defence. The first came from Allen Bailey who secured the tackle in the backfield and fell on the dropped ball. The Daniel Sorensen pick six came from Carr throwing a misjudged pass after being put under pressure by the Chiefs’ line. The second fumble came from a strip sack by Houston, the OLB, but it was on a pass rush so it’s still worth a mention. Finally, the second pick, and fourth turnover, of the game was from another forced pass from Carr that came about because of some great edge pressure by Bailey.

So the defensive line had an absolute monster of a game in the final week of the regular season. Keeping the divisional rival Raiders to a measly 3 points and securing the Chiefs the number 1 seed in the AFC.

The Future:
Keeping Jones is going to be a huge part of our future and identity as a defence, so I’m glad we’re doing that. However, losing Justin Houston and Dee Ford at linebacker means that there will be a lot more pressure on the line to perform because they’re unlikely to have as talented help next season.
Having said that, the Chiefs recently signed defensive end Alex Okafor, who has been at the Saints for the last 2 seasons. In 2018 Okafor played, and started, in all 16 of the regular season games for New Orleans. He totalled 4 sacks, 9 QB hits, 1 forced fumble, and 5 tackles for a loss. He’s a good pick-up to help give the position some more depth, however the stats are quite weak considering that the did start every single game last season.

Aside from free agents the Chiefs also do have some more options in this year’s draft. It’s quite a edge rusher heavy draft class this year with plenty of first round talent. So it’s a shame we don’t have any earlier picks to try and bring in a top tier rookie. However, I feel like, with the acquisition of Okafor and the change of scheme, there are other holes on the roster that need plugging before the team deals with the defensive line. So I think that our current talent will be enough to perform similarly to what we saw this season.
Overall I feel like, amongst all of the mayhem, it’s been a quietly productive year for the Chiefs’ defensive line. Chris Jones showed how he can become the future anchor of the team’s defence, Nnadi proved to be a strong role player in the run defence and Allen Bailey proved how he’s still got it, and some more, after finishing his 8th season in the league. With some moves being made and a strong switch-up in how the defence is ran as a whole, I feel confident that the line will be able to do its job to a good standard in 2019!

View all posts by Owen Widdowson