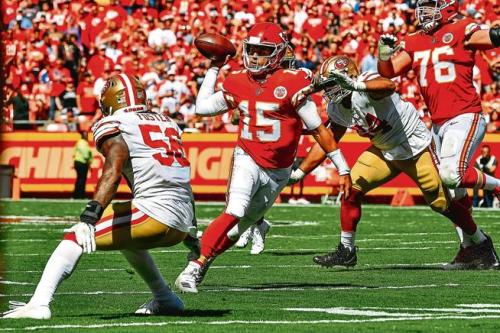 The story so far

From the sublime to the ridiculous. A very impressive performance in the first preseason game against the Bengals was followed up with a complete dumpster fire against the Steelers. In fairness the weather delay to start was disruptive (especially when it moves your kick off back to 1:30am!) but the sloppy play from both teams was pure preseason trash. Let’s hope a return to Arrowhead brings a return to a more polished performance. The 1s are allegedly playing into the 3rd quarter but I’ll be surprised if Mahomes and co are still in the game at that stage. Nothing to gain and potentially injured players to lose.

2 weeks, 2 TD and he looks dangerous. How far along is he with his development? Will he get a drive or two with the 1s and Mahomes tossing rainbows his way? If he continues to progress at the rate he seems to be then last year’s offence is even scarier this year.

It’s preseason. I’m struggling here. Last week sapped the enthusiasm for preseason from me. Still need to see how the defence is developing but considering injuries and the vanilla essence of the schemes it’s really hard to take anything meaningful. I’m going to put Mo Clairbourne against the 49ers WR s. Is he an upgrade on what we already have? Can he be average? Above average? He’ll miss the first 4 games through suspension but it’ll be interesting to see what’s coming beyond that.

“Any time you come back from injury, there are a bunch of mental hurdles you’ve got to get over, even when you’re healthy and feel good,” Shanahan said.

“I’m sure there is some stuff with it just being eerie going back to that same place,” Shanahan added, “but I haven’t talked to him specifically about it.”

“He has grown a lot since we first got him here. Figuring it all out. I like his progress. He has attacked it,” Reid said. “We talk about where he started and where he’s at now, it’s a completely different level. You can tell by the respect that he gets from the guys and the respect he has in return for the veteran players. They’ve accepted him in there and he has worked hard to gain all of that respect.”