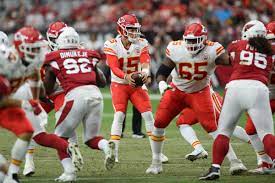 August 21, 2021 Author by duncandsmartPosted in Uncategorized

The Chiefs maintained their 100% preseason record with a 17-10 win over the Cardinals in Arizona last night, but what, if anything, did we learn? Here are some early thoughts…..

Chris Jones is going to be a problem. Jones is hardly a breakout star but he looks like he’s REALLY enjoying his role moving around the line. He tallied a sack and batted down a pass and was a destructive force throughout his time on the field. Hands up anyone who was quick off the mark to get him at 100-1 for DPOTY.

The Defence as a whole showed up ready to play. Fair enough the Cardinals were missing a number of names due to injuries and Covid related issues but given the mood they were in it’s debatable if they’d have gotten much change out the Chiefs D. Stout in the tackle, strong in coverage, they forced 3 and outs in AZ’s first 3 drives, Kyler Murray didn’t get a sniff. Ward and Sneed looked lively early but the pick of the plays was Juan Thornhill’s incredible diving interception in the end zone. He’s had a tough road back from injury but this looked every inch the star we thought we had in year 1.

Mecole Hardman remains an enigma. It was a rough night early doors for the year 3 speedster, especially on social media. After snagging his first couple of targets the Mahomes – Hardman radar misfired somewhat and they missed on their next 4 attempts. Blasphemous as it is to say it wasn’t Mahomes’ best night so it;s unfair to lay the blame solely at the receiver’s feet but Hardman is a player that continues to divide opinion among Chiefs fans and some knives were being sharpened when he made a brilliant turn and low grab to pick a slight underthrown Henne pass off the turf for a score. We know he has the speed and can make the big plays but can he add more of the basics to cement the WR2 spot from Byron Pringle?

The new look O-Line is set in stone. I’ll admit I was dubious Andy Reid would start 3 rooks on the line but it’s going to take something monumental and/or hugely unfortunate if any of the 5 guys in possession now don’t start week 1. These are some big, nasty men up front now and they could be there for the next 4-5 years. a mouthwatering prospect.

Some of the new guys will need time. So much has been made of the revamped OLine and guys like Noah Grey and Nick Bolton got alot of airtime in training camp coverage it’s easy to get carried away and assume all the rookies are about to hit the ground running full speed. It’s obvious from preseason some of them are still feeling their way into the pro game and will need time to settle and adjust. Patience is the watchword.

We’re going to LOVE Trey Smith. This is obvious but it’s still fun to say.