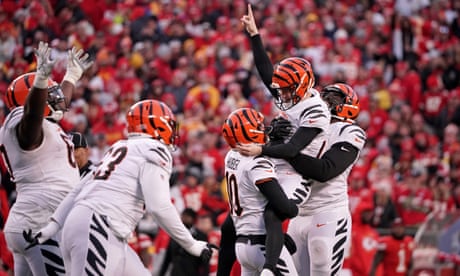 February 8, 2022 Author by duncandsmartPosted in Uncategorized

Now that the dust has settled somewhat it’s time to take a little look back on the season that was.

There is a saying in ‘soccer’ over here that goes “it was a game of two halves”. Never has a round ball cliche been more applicable to it’s American cousin than to describe the Chiefs, perhaps more specifically Patrick Mahomes, in their AFC Championship loss to the Cincinnati Bengals. Maybe that analogy can also apply somewhat to the season as a whole as well, let’s take a look.

Kansas City started the season slowly. They fumbled one away against Baltimore. Lost a turnover fest to the Chargers. Barely showed up in Buffalo.

After week 7 the Chiefs were 3-4 and coming off an absolute schooling by the Tennessee Titans. The Chiefs scored 3 points in that game. THREE. With Patrick Mahomes as Quarterback that is unimaginable. The media talking heads were out in force with their ‘hot takes’.

The Chiefs will miss the playoffs.

David Carr is the best in the West.

Maybe they were right. All the major AFC players now had tie-breakers over Kansas City. The Defence was close to being historically bad. Dan Sorensen was a figure of fun across the league. The Chris Jones DE experiment was failing. Chiefs twitter was imploding, fans were attacking players, players were hitting back. It was a mess. This was not the season we had been expecting

But then, slowly, ever so slowly the ship turned and started to right itself. Yes,they were helped by a couple of favourable match-ups at the right time. The Giants were a dumpster fire all season and fans were once again denied a Mahomes vs Rodgers showdown. it wasn’t always scintillating but quietly the Melving Ingram inspired Defence was turning itself into a top half unit. The Offence was starting to find its groove as well, the turnovers disappeared as did the drops. Mahomes was finding his groove and the connection to Kelce time and again produced first down after first down.

W followed W, the Raiders were kerb stomped – twice, the Chargers were beaten in an absolute nailbiter in which Travis Kelce once again showed he’s the best in the game. All of a sudden the Chiefs put together an 8 game streak and went from out of the play-offs to in charge of the division and with the #1 seed in their grasp.

The quintessential season of two halves.

Ultimately the Chiefs fell short of their goal of getting back to the Super Bowl for the 3rd consecutive year. The AFCCG second half performance will live long in the memory for all the wrong reasons. The whys and wherefores will go down in #ChiefsKingdom folklore alongside unnamed kickers, no punt games, forward progress and offside calls. (man that sentence hurts to type).

Personally I thought it was impossible for us to lose the same game twice to the Bengals in such short order, I’ll have to take being wrong on this one on the chin. However after coming through ‘the greatest game ever’ the previous week we all thought the Chiefs had seen off the best the AFC had to offer in the Bills and and a QB playing at a near god like level in Josh Allen. Cincinnati are having a fairy tale season and deserve their place at the dance but there is a nagging feeling the door was ajar for the Chiefs to cement their legacy as a championship winning dynasty.

Chiefs fans know they can’t win them all and only time will tell just how good Joe Burrow and this Bengals team are but this one might linger as the one that got away.